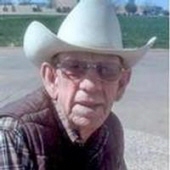 Graveside services for Albert J. Phillips, 75, of Brownfield will be at 10:30am, Monday, September 17, 2012 in Springlake Cemetery with Chaplin Chris Downer officiating. Burial will be under the direction of Brownfield Funeral Home.

A.J. passed away Saturday, September 15, 2012 at his home in Brownfield. He was born June 21, 1937 to Orsborn Foster and Willie Lee (Bell) Phillips. He attended Springlake High School. He was in the U.S. National Guard for 6 years. A.J. married Janis Elizabeth Jones, his high school sweetheart, in Lubbock on August 15, 1958. He worked at Pioneer-Energas for 29 years. He then worked as a security guard at Ruidoso Downs Race Track over the past 20 summers. He enjoyed visiting with his coffee drinking buddies, friends on the deck, golfing, maintaining a pretty yard and especially his grandchildren. A.J. was a member of Brownfield First Baptist Church. He is preceded in death by his parents.