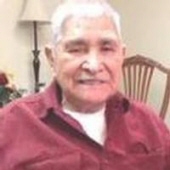 Olton – Funeral Mass for Jose Antonio Z. Manriquez, 81, of Olton will be celebrated at 2 pm, Thursday, July 18, 2013 at St. Anthony’s Catholic Church in Brownfield with
Father Gerald Leatham officiating. Burial will follow at the Terry County Memorial Cemetery under the direction of Brownfield Funeral Home.

Rosary will be at 6 pm, Wednesday the 17th, at the Brownfield Funeral Home.

Antonio went to be with the Lord on July 15, 2013. He was born December 1, 1931, in San Juanito, Chihuahua, México, to Rómulo Manriquez Cervantes and María de la Luz Zamarron Núñez. He was married to Mercedes Quinonez on January 24, 1954, in Nuevo Casas Grandes, Chihuahua, Mexico.

The family greatly appreciates the special care given by staff at The Plaza of Lubbock, and Interim Healthcare Hospice.