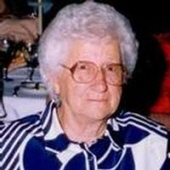 Services for Bobbye Turner, 92, of Brownfield will be at 10:30am, Tuesday, December 20, 2011 at Brownfield First United Methodist Church with Rev. Ruby Moultrie officiating. Burial will be in Terry County Memorial Cemetery under the direction of Brownfield Funeral Home.

Bobbye passed away Sunday, December 18, 20ll in Brownfield.
She was born February 17, 1919 in Hico to William Oscar and Annie McFadden Thompson. She graduated from Big Spring High School. She married John Paul Turner on June 6, 1939 in Big Spring, Texas. They moved to Brownfield in 1954. She was a member of Eastern Star and Brownfield First United Methodist Church. She is preceded in death by her parents; her husband; a grandson, Paul Glenn Grimes; 2 sisters and a brother.

Pallbearers will be family and friends.