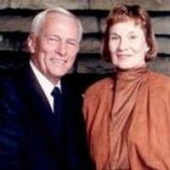 Since Mom left March 2, Dad wasn’t the same. Married for sixty-seven years, it was too big a loss. Today they’re together again. Dad left June 21, to be Barbara’s partner again. Carrol W. Collier was born 12-31-24 and raised in Brownfield, TX. After graduating high school, he joined the Air Force to become a B-24 bomber pilot. During training, he and Barbara were married in Lake Charles, LA. After serving during the closing years of World War II, he returned to enroll in Abilene Christian College where he earned a degree in chemistry.

He and Mom moved back to Brownfield, where they raised their three sons, Craig, Chris and Clark and spent their working years. Carrol purchased Brownfield Funeral Home from his father and provided that service to the community for 43 years. He also served the community as long time school board member and president, Rotary member and president, little league umpire, and member of the board of directors of the First National Bank.

He and Barbara retired in 2000, to enjoy the peace and beauty of their Ruidoso mountain home. He is survived by his sister Wanda Wade (Jimmy), sons Craig (Beth), Chris and Clark, three grandchildren, and three great grandchildren. He also left a million smiles which he freely shared with everyone.

We will live the rest of our days with the strength of their love and conviction, and the graciousness of their efforts. There will be a celebration of their lives at their home in Brownfield,1304 E Harris, from 1-3 Saturday afternoon, July 21.