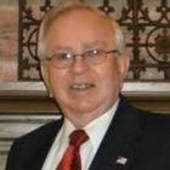 Dale Brown, 87, of Brownfield passed away on December 18, 2010 in Warrenton, Virginia. Mr. Brown had been visiting family for the Thanksgiving holidays when he became ill and was hospitalized. He died with family present.
Services will be at 2pm, Wednesday at First Baptist Church in Brownfield, with Chaplin Randy Hamilton officiating. Burial will follow in Terry County Memorial Cemetery under the direction of Brownfield Funeral Home.

The family will receive visitors from 5-7pm, Tuesday at Brownfield Funeral Home.

Dale was born on September 29, 1923 in Lueders, Texas to Neely and Katie (Newcomb) Brown. As a young boy, he moved with his family to the Terry County community of Tokio. He graduated from Plains High School in 1942 and was drafted into the Army. During World War II, Dale served as a sergeant with the 473rd Anti Aircraft Artillery Battalion of the 8th Armored Division seeing action in France and Germany. During his recent trip to Virginia, Dale was able to visit the World War II Memorial where he proudly found his name among those who served with honor.
He and Avo Hendricks were married June 30, 1946 in the First Baptist Church of Brownfield. Dale and Avo were long time members of this church and celebrated many of life’s milestones there with family and friends. His long time community friends were also Dale’s anchor throughout his life and during Avo’s long illness.
Dale served many years as the Veterans Service Officer for Terry County and later as the county’s Adult Probation Officer. He was a member of the American Legion, Veterans of Foreign Wars and the Kiwanis Club. Military honors will be received at his funeral.
He was preceded in death by his parents, five brothers; D.A., Guy, T.P., Nathan and Marvin, one sister; Katherine (Brown) Smith-Magin, and his beloved wife, Avo who died in October of this year.

The family wishes to express their gratitude for all the concern and prayers they received while in Virginia to Capital Hospice in Falls Church, Virginia as well as the doctors and nurses of Fauquier Hospital in Warrenton.

The family suggests memorials to First Baptist Church in Brownfield. Online condolences may be made at www.BrownfieldFuneralHome.com.