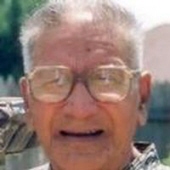 Daniel M. Fonseca, Sr. 88, of Brownfield passed away on Wednesday, November 12, 2009. Services will be at 10:00 a.m. Saturday, November 14, 2009 at St. Anthony’s Catholic Church with Father Gerald Leatham officiating. Interment will follow at Terry County Memorial Cemetery under the direction of Brownfield Funeral Home. Rosary will be at 6:00 p.m.-7:30 p.m. Friday, November 13, 2009 at the funeral home.

Daniel was born on August 13, 1921 in Runge, TX to Alfonso and Mercedes Fonseca. He joined the United States Army in 1942, serving as a military police officer in WWII before his discharge in 1945. He married Leocadia Garcia on April 11, 1944 in Runge, TX. Together they moved to Brownfield from Lazbuddie in 1947. He worked for Massingill Construction for many years and also farmed for Perry Lockett Farms in Terry County. He was a avid Houston Astros and Texas Tech baseball fan. Daniel was a member of VFW and a lifelong member of St. Anthony’s Catholic Church.