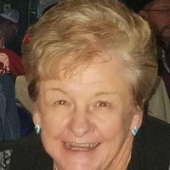 Funeral services for Deola Riley Copeland, 67, of Post will be held 2 pm Tuesday, August 22, 2017 at Calvary Baptist Church with Chaplin David Jones officiating. Burial will follow in the Terry County Memorial Cemetery under the direction of Brownfield Funeral Home.
There will be a family visitation from 6pm to 8pm Monday, August 21, 2017 at Brownfield Funeral Home.
Deola passed away Thursday, August 17, 2017 in Lubbock. She was born August 25, 1949 in Marlow, Ok. to Henry Thomas and Ola Faye Riley. She was Captain of the kitchen at Giles W. Dalby Correctional Facility where she worked for 17 years. She married Daniel Leslie Copeland in Borden County. Deola was a good worker and a loving mother. She was loved by her kids, grandkids, brothers, sisters, and the rest of her family. She is preceded in death by her parents and husband.
Deola is survived by three children, Lavoy Lechuga and wife, Teena, of Woodward, Ok, Billie Jean Zapata of Lubbock, David Lechuga and wife Angela of Lubbock; nine grandchildren; nine great grandchildren; four siblings, Billy Riley and wife, Linda, of Seminole, Theresa Contreras and husband, Victor, of Brownfield, John Rilely and wife, Freida, of Dublin, Sheena Herron and husband, James, of Roy, Nm; and several nieces and nephews.