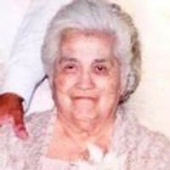 Ermelinda Arrezola, 77, of Brownfield went home to be with her Lord and Savior on April 12, 2011.
Services will be held at Inglesia Bethel on Thursday, April 14, 2011 at 2pm with Santos Gamez officiating.
Family will receive visitors from 6-8 on Wednesday April 13, 2011 at Brownfield Funeral Home.

Ermelinda was born on May 21, 1933 to Patricio and Julia Nanez in Coy City. She grew up and attended schools in Coy City.
Ermelinda married Mateo Arrezola on April 21, 1954 in Karnes City. She is preceded in death by a sister, Oralia Luna, and two brothers, Eloy and Arturo Nanez, and her parents.