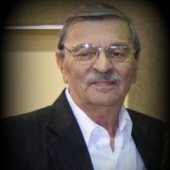 Retired Navy Command Master Chief Petty Officer George G. Yun, 75, of Buchanan Dam, Texas passed away peacefully Monday, January 15, 2018. Born May 1, 1942, in Duquesne, PA. to George and Rose (Magdic) Yun. George joined the Navy and fell in love with the sea. The only thing that George loved more than the sea was his wife of 51 years, Myrna Loy Prather. George and Myrna were married in San Diego, Ca on August 13, 1966. They had two children, Beverly and George (Guy). The family lived in many different locations and thanks to his military career, George was able to visit almost every country in the world. George had an exemplary military career and was earned numerous awards.

He is preceded in death by his parents, his sister, Carol Mellon, his daughter-in-law, Linda and his loving wife Myrna. He is survived by his daughter, Beverly De Leon, of Seguin, TX., her husband Rafael and their children, Heather Warncke and her husband Jon of Bryan, Texas, Charlotte De Leon, and Zachary De Leon. His son, George (Guy) Yun of Granite Shoals, TX and his son Christopher Yun. His sister, Patricia Yun of Duquesne, PA; and sister - in - law, Betty Charlebois of Brownfield. George leaves behind many family members and countless friends that he made over the years.

A Military Memorial will be held 11:00 am Saturday, March 17th, 2018 at Terry County Memorial Cemetery in Brownfield, Texas.