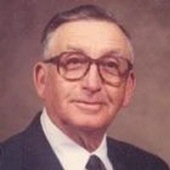 Hugh C. Clark
Graveside services for Hugh Clark, 85, of Brownfield will be at 2:00 pm, Thursday, November 6 at Terry County Memorial Cemetery with Rev. Randal Hamilton officiating under the direction of Brownfield Funeral Home.

Hugh passed away Tuesday, November 4, 2008 at his home in Brownfield. He was born December 4, 1922 in Chico, Texas to Dewey and Annie Elizabeth Clark. Hugh attended Meadow Schools. He moved to Brownfield when he was ll years old. Hugh married Anna Lois Lunceford on November 16, 1940 in Meadow. She preceded him in death February 19, 1995. Hugh was a retired farmer. He was a WWII Army Veteran. He was a member of the VFW and American Legion. He was a member of Calvary Baptist Church. He is also preceded in death by 1 sister and 4 brothers.