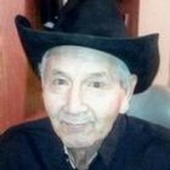 Services for Ignacio M. Martinez, 83, of Brownfield will be at 10am, Monday, July 15th at St. Anthony’s Catholic Church. Burial will be in Brownfield Cemetery.

Ignacio passed away on July 11, 2013 in Brownfield. He was born on December 10, 1929 in Lockhart to Jim and Elisa Perez. He moved to Brownfield in 1957. Ignacio then married Maria Campos on March 17, 1958 in Brownfield. In the 60’s he began working for the City of Brownfield until retiring in 1995. He was a member of St. Anthony’s Catholic Church. He enjoyed caring for his yard and being with his grandchildren and great grandchildren.