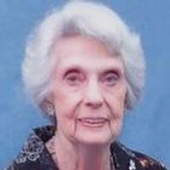 The Celebration of Life service for Jean McDonald will be in the sanctuary of the Living Water Foursquare Church in Brownfield at 11:00 am, Friday, May 23, 2008. There will be a reception immediately following in the Fellowship Hall. Interment will be in Levelland Cemetery in Levelland, TX under the direction of Brownfield Funeral Home.

Jean went home to be with her Lord on Tuesday, May 20, 2008. She was born on June 10, 1923 to Leon Cleve and Ada Brown in Abilene, Texas. Jean and her family moved to Brownfield in 1959. She was employed almost 20 years by Brownfield State Bank where she became a familiar face to many of the residents as one of the "outside" tellers alongside her friend and neighbor Frances Rimer. Later, she moved to San Marcos, Texas for a period of a few years to work as a resident "dorm mom" at San Marcos Academy, a private Christian school for young people, but returned to Brownfield to take a position on staff at the Foursquare Church. She retired for some years, but then at around 80 years of age, began working again, most recently at her favorite job, assistant to Margie Crossland at the Terry County Heritage museum. She especially enjoyed the quilt shows, but she also became an enthusiastic student of the history of Brownfield and the vicinity. She loved to spend hours driving around the area, pointing out significant landmarks and telling wonderful, true stories complete with dates and names of what happened, why and when!

Jean is survived by two sisters, Aurelia Cosby and Lyska Davis and their children as well as two daughters, Dorothy Quertermous of Los Angeles, Marlene McDonald of Corvallis, Oregon and a son, Martin McDonald, also of Los Angeles. All three attended and graduated from Brownfield schools. She has four grandchildren, Anthony McDonald, Jonathan Cooke, Alaina Hanson and Sarah Quertermous and four great grandchildren, Andrew and Victoria Hanson, Logan McDonald and William Cooke.
Her specific wish was to express her deep gratitude to the staff of Cottage Village in Brownfield for their love and care during her stay there and also to VistaCare Hospice, to Jill Barnwell and Xochitl Rodriquez. Particularly and finally to Trudy Farr and Alma Halstensgaard, both of whom have become family to her.