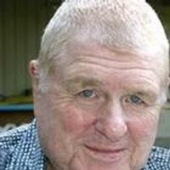 Graveside services for Jesse Wilburn King, of Lubbock will be at 2:00 p.m. Monday, November 10, 2008 at Terry County Memorial Cemetery with Rev. Tom Lakey officiating. Burial will be under the direction of Brownfield Funeral Home.

At peace with himself, his life and his relationship with his Lord, Jesse Wilburn King departed this Life on Friday morning, November 7, 2008. Jesse was born on June 29, 1934 in Canyon Valley, Texas to Percy and Nina Jewel King. He moved to Brownfield as a small child where he attended Brownfield schools. He was a veteran of the United States Army where he served in the Korean War. Jesse had worked in Law Enforcement as a Police Officer. He is preceded in death by his parents, two brothers (A. H. "Slim" King and Bill King) and a sister (Dolores King).