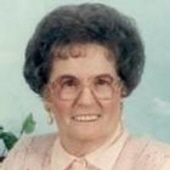 Services for Judy Gandy, 85, of Brownfield will be 2pm, Friday, October 8, 2010 at West Tate Church of Christ with Ernest Smith officiating. Burial will be in Terry County Memorial Cemetery under the direction of Brownfield Funeral Home.

The family will receive visitors at the funeral home from 6-8pm Thursday Oct. 7th.

Judy passed away Sunday, October 3, 2010 in Flower Mound. She was born December 16, 1924 in Fox, OK to Charlie Griver "Doc" and Ester Wynona Morris Seal. She attended school in Loop. Judy married Roy Barton. He preceded her in death Nov. 11, 1947. She then married Walter Ray Gandy, Jr. in Lovington, NM on April 19, 1948. He preceded her in death on January 3, 2005. She is also preceded in death by her daughter, Paula Bentley; a sister, Johnny Kayajian. She was a member of West Tate Church of Christ.