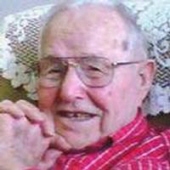 Services for Kenneth Granville Purtell, 97, formerly of Brownfield will be at 10am, Thursday, March 8, 2012 at Brownfield First United Methodist Church with Dr. Stan Cosby of Amarillo officiating. Burial will be in Terry County Memorial Cemetery under the direction of Brownfield Funeral Home.

There will be a family visitation from 5-7pm on Wednesday at the funeral home.

Kenneth passed away Friday, March 2, 2012 in Boone, IA. He was born May 7, 1914 in Locksburg, Arkansas to Rufus Judson Purtell and Nellie Arnold Purtell Holcombe. He attended Gomez and Lahey schools in Terry County and finished high school in Brownfield in 1934. Kenneth married Ruth Young on October 26, 1938 in Lubbock. She preceded him in death in 2009. He is also preceded in death by a son, Gene Purtell in 1996. He attended Texas Tech University where he received a B.S. Degree in Agriculture Economics in 1941. He taught school in 1937 and 1938 at Lahey and worked for the USDA about 3 years. He also owned and operated Purtell's "Dad and Lad" clothing store for 3 years. From 1953 until retirement in 1999 he farmed in the Brownfield area. For most of his adult life, Kenneth was an active worker and board member in the First United Methodist Church. He was a Mason and past director with Lyntegar Electric. A sister and 2 brothers also preceded him in death.