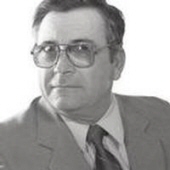 Services for Marion "Buzz" Rutledge, 75, of Brownfield will be at 10am, Wednesday, April 16, 2014 at Calvary Baptist Church with Rev. Jerry Payne officiating. Burial will be in Terry County Memorial Cemetery under the direction of Brownfield Funeral Home.
There will be a family visitation from 6-8pm Tuesday at the funeral home.

Buzz passed away Saturday, April 12, 2014 in Lubbock. He was born on May 12, 1938 to Robert E. and Thelma Era (Britton) Rutledge in Knox City, TX. He graduated from Meadow High School. He was a US Army Veteran. Buzz married Laverne Dyke on June 2, 1961 in Brownfield. He worked as a field foreman for Amoco for 25 years. He was a member of Calvary Baptist Church. He is preceded in death by his parents; a daughter, Janett Rutledge; a grandson, Michael Andrew Huckabee; a brother, James Rutledge; 2 sisters, Latrice Harper and Jane Draper.
Buzz is survived by his wife Laverne Rutledge of Brownfield; a daughter, Brenda Huckabee and husband Brad of Plainview; a son, Paul Rutledge and wife Angie of Amarillo; a brother, Bob Rutledge and wife Billie of Garland; 4 sisters, twin sister, Sallye McCarty of Carmel, CA, Glenda Martin of Imperial, CA, Bettye Meeks and husband Henry of Buffalo, TX. and Nancy Smith and husband Hollice of Odessa; 5 grandchildren; and a great grandchild on the way; many nieces and nephews.
The family suggests memorials to the American Cancer Society.