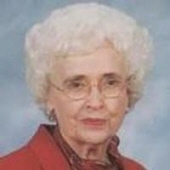 Memorial services for Martha Lee Pettigrew, 86, formerly of Brownfield will be at 11:00am, Friday, July 23, 2010 at Brownfield First Baptist Church with Rev. Ken Flowers of Kingsland officiating. Burial will be in Terry County Cemetery under the direction of Brownfield Funeral Home.

The family will receive visitors from 6:00-8:00pm, Thursday, July 22 at the Fulford Barn on Pecan Drive.

Martha passed away on Sunday, July 11, 2010 in Katy, TX. She was born May 31, 1924 in Long Beach, CA. to Willie and Verna Polk. She graduated from Slaton High School. Martha married Tom C. Pettigrew on June 21, 1944 in Slaton, Texas. He preceded her in death on August 18, 1993. They moved to Brownfield in 1946, where they farmed until 1959. She worked at Ruth’s Beauty Shop for 15 years. They owned and operated the Gulf Service Station in Brownfield and then Tom’s Conoco and Distributorship from 1967 until retiring in 1983. She was a past board member of the Terry County Cemetery Association. Martha was an active member of the Challis Home Demonstration Club for more than 50 years until moving to Houston. She was a member of Bear Creek Baptist Church of Katy and former member of First Baptist Church of Brownfield. Martha is also preceded in death by a son, Larry Dale in 1973; 4 brothers Bert, Donald, Wayne Polk and Harley Patterson and a sister Billie Hennington.

Martha is survived by her son, Tom C. Pettigrew, Jr. and wife Mary of Houston; a grand-daughter, Pebble Dawson and husband Michael of Lubbock; great grandchildren, Jaci and Swayde Roberts and Mason and Mallori Dawson.