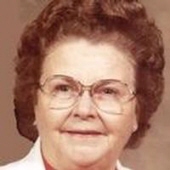 Pauline A. Adams, 89, of Brownfield passed away Friday, June 5, 2009 in Brownfield. Services will be at 2:00 p.m. Monday, June 8, 2009 at First Baptist Church Chapel with Rev. Ken Flowers officiating and Rev. Randy Land assisting. Interment will follow at Terry County Memorial Cemetery under the direction of Brownfield Funeral Home.

Pauline was born on November 12, 1919 in Young County to J.R. and Viola Kee. She moved with her family to Terry County when she was 9 years old, attending schools in the communities of Harris, Tokio, Gomez and Brownfield. She met her husband, William "Kyle" Adams at Gomez Baptist Church. Eventually she moved to Graham, Texas with her family. She continued dating Kyle, moving back to Brownfield with him after they were married on September 25, 1938 in Graham. They spent the rest of their lives in Terry County, the land they both dearly loved. Before retiring to Brownfield, they lived for many years in the community of Wellman, farming throughout Terry and Gaines Counties. Pauline was active in Terry County home demonstration clubs as well as The Order of Eastern Star, serving that organization several terms as Worthy Matron. Kyle preceded her in death on September 19, 1992. She is also preceded in death by her daughter, Lynda Jean Adams in 1947; her brother, J.D. Kee and her sister, Francis Tapp. She was a member of First Baptist Church.