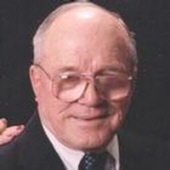 Services for R. G. "Pa" Nutt, Jr, 87, of Brownfield will be at 2:00 pm, Wednesday, December 10, 2008 at Challis Baptist Church with Bruce W. Smith and Dale Matlock officiating. Burial will be in Terry County Memorial Cemetery under the direction of Brownfield Funeral Home.

R. G. passed away Saturday, December 6, 2008 in Brownfield. He was born November 29, 1921 in Burnett County, Texas to R. G. and Lucy Nutt. He was a WWII Army Veteran. He married Ima Gene Reynolds on Aug. 5, 1950. She preceded him in death on Dec. 28, 1987. R. G. then married Flossie Proctor Richards on September 3, 1988 in Brownfield. He farmed in Terry County for over 40 years. He was a member of the Masonic Lodge and Challis Baptist Church. R. G. is also preceded in death by two sisters, Shirley Suddeth and Wanda Jean "Polly" Nutt.