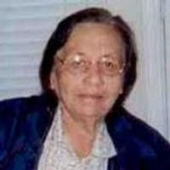 Services for Rosario A. Quinones, 77, of Brownfield will be at 10am, Monday, November 22, 2010 at St. Anthony's Catholic Church with Father Gerald Leatham officiating. Burial will be in Brownfield Cemetery under the direction of Brownfield Funeral Home.

Rosario passed away Friday, November 19, 2010 in Lubbock. She was born May 9, 1933 in Durango, Mexico to Sebastian and Cecilia Almodovar. She married Ernesto Quinones in 1960. They moved to Brownfield in 1976. He preceded her in death in 2002. She is also preceded in death by a daughter, Martha Alicia; 3 brothers and 1 sister.