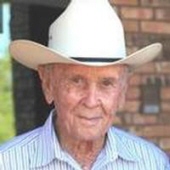 Services for Rufus Edwin (Papa) Franks, 86, of Brownfield will be at 2pm Thursday, January 17, 2013 at Brownfield First United Methodist Church with Rev. Chris Downer and Rev. Ruby Moultrie officiating. Burial will be in Terry County Memorial Cemetery under the direction of Brownfield Funeral Home.

Rufus passed away Tuesday, January 15, 2013 in a Lubbock Hospital. He was born May 5, 1926 to D.J. and Beadie (Vernon) Franks in Roby, Texas. He graduated from Brownfield High School in 1944 and was a WWII Navy Veteran. He married Glynna Faye Ross on November 6, 1946 in Brownfield. She preceded him in death May 17, 2001. He then married Gladys (Grawunder) Stice on May 5, 2009 in Brownfield. He was preceded in death by his parents, 5 brothers and 5 sisters.

In lieu of flowers the family requests contributions to Lone Tree Bible Ranch of Capitan, NM or In Touch Ministries.