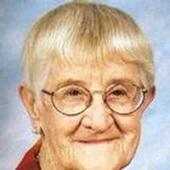 Terry Lou Moorhead, 82, of Brown field passed away Monday, July 2, 2007 in Lubbock. Services will be at 10:30 a.m. Friday, July 6, 2007 at the First Baptist Church in Brownfield with Rev. Randy Land officiating. Terry Lou was born October 18, 1924 in
Brownfield to Rudolph and Era Moorhead. She attended Brown field schools. She was a fourth grade teacher at Brown field Elementary School for 41 years until her retirement. She was a member of the Teacher's Retirement Association. She was a member of the First Baptist Church where she was the Sunday School secretary, sang in the choir, assisted with Meals on Wheels, was a member of WMU where they quilted for the needy, a member of the Hospital Pillow Ministry, the Women's Prison Ministry, the Missionary Card Ministry, and the Mexico River Ministry. She was also a 50 year member of Delta Kappa Gamma. She is preceded in death by her parents and her brothers, Tom Moorhead and Durward Moorhead. She is survived by 3 nephews, Greg Moorhead of Arizona, Michael Moorhead of Dallas, and Larry Moorhead of Houston, and her sister-in-law, Joyce Moorhead.