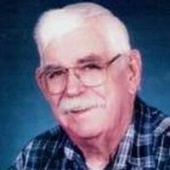 Thomas will be in state Monday at Brownfield Funeral Home from 9am-8pm. There will be a family visitation from 5-7 Monday.

Thomas passed away Friday, September 10, 2010 in Brownfield. He was born July 2, 1926 in Clyde, Texas to Thomas C. and Lillie Dale Talley. He came to Brownfield in 1940. He worked at the Seagraves Carbon Plant for 30 years. He then married Margie Wilson on March 27, 1943. She preceded him in death in 1997. He then married Katie S. Scheftic-Daley. She preceded him in death in 2007. Thomas was a Mason, a WWII Army Veteran, a writer, HAM radio operator and multi-hobbiest. He was also preceded in death by a daughter, Patsy Mae Talley in 1944 and a sister, Ona Myrle Payne.