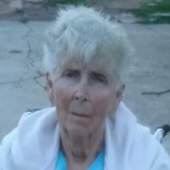 Funeral services for Anna Mae Jowers will be held at 11am, Monday, October 9, 2017, at Abundant Harvest Community Church with Jerald Baldwin officiating. Burial will follow at Terry County Memorial Cemetery under the direction of Brownfield Funeral Home.
There will be a family visitation on Sunday, October 8, 2017, from 5pm to 7pm at Brownfield Funeral Home.
Anna passed away Wednesday, October 4, 2017, in Lubbock. She was born February 22, 1938, in Matteson County, Arkansas to Charlie and Beulah Johnson. She married James M. Jowers on January 2, 1954, in Berryville, Arkansas. She was a member of the Church of the Nazarene. Anna was a mother of five who loved everybody, always saw the good in everything, and lived by example. She was always willing to help and was active in church. Anna had a sweet kind nature. She was an excellent china painter.