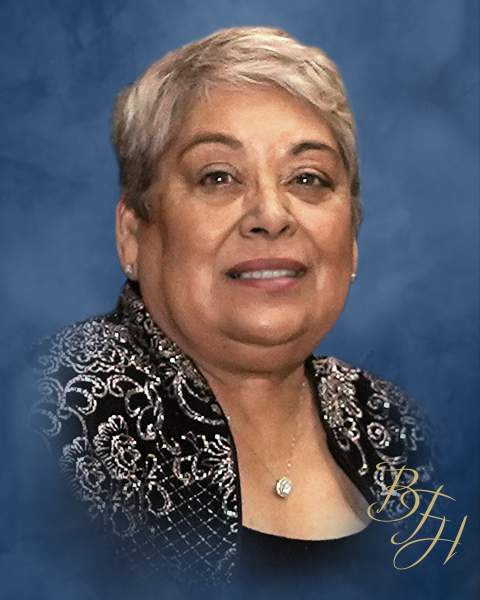 A Funeral Mass for Anna Rodriguez will be held at 10:00 am Saturday, August 27, 2022, at St. Anthony's Catholic Church with Father John Ohlig officiating.

Anna Maria Medrano Rodriquez was born on July 27, 1950, in Odem, TX to Daniel Medrano Sr. and Estefana Medrano. She lived her early years with her family of five, older brother Daniel Medrano II. and baby brother, René Medrano, as migrant workers. They lived primarily in South TX and would travel to West TX during cotton season. They permanently made Brownfield, TX their home in the late 50's. Anna loved to read and excelled in academia. She shared her love of reading with her daughters and grandchildren, with frequent trips to the library.

Anna married Jacobo Deanda in 1969 and filled their home with three daughters. There was nothing she wouldn't do for her daughters. They were her pride and joy and she was always there to help them. She made certain they had everything they needed and then some. The most important gift she bestowed upon them was her love of family, strong work ethic and compassion for others. There was never a moment that she wasn't teaching her children to be kind, loving, responsible and hard working. She was tiny but mighty and fought hard for what she believed in and what she wanted in life.

She became widowed in 1978 and knew she needed a career to provide for her daughters. Her dream was to be a nurse, one which she fulfilled in 1982. She worked at Brownfield Regional Medical Center, Knox-Stone Clinic and various home health agencies during her career of over 40 years. Her patients were so important to her and she had love for each and every one of them.

In 1986, she was set up on a blind date with the man that would become her future husband, Mike Rodriquez. Mike had to prove himself and their dates would frequently include her daughters. She and Mike traveled throughout TX and NM with his career in the oil and gas industry. He called her his "Four Leaf Clover" because he said if she went with him he would be successful. Her mother lived and traveled with her after her father passed away. She retired and devoted herself to her mother's care.

Through their adventures, she and Mike always made time for their girls and their seven grandkids. Everyone called them Grandpa and Grandma as they sat in every gym for volleyball and basketball games, sat in the rain, heat or cold for football, softball and baseball games and enjoyed every choir performance. They never missed an opportunity to be with their babies. Their grandchildren, Jessica Alexandra Garza, Daniela Salazar, Stephen Garza (Danielle Gonzales), Madison Muniz, Julian Salazar (Kayla Blackmon), Lyndee Muniz and Zachary Muniz have so many beautiful memories of grandma taking them to every Harry Potter Movie, her daily trips to Sonic and her over the top Christmas celebrations. She relished becoming a great-grandmother to Avery Salazar. She named herself GG for Great-Grandma and Great-Granddaughter. She brought pure joy to her heart and we will always remember their special bond.

Anna leaves behind a legacy of love, integrity and deep devotion to her Catholic faith. All of these things were instilled in her family and even in her darkest days she was ever faithful knowing that Jesus was her Savior and healer. She will be deeply missed by her daughters, grandchildren, brother and sister-in-law and all her nieces, nephews and cousins. To know her was to love her. She is survived by her husband, Mike Rodriquez of Brownfield TX; daughters, Sandra Deanda Garza and husband Jessie, Linda Deanda, Stephanie Deanda Muniz and husband Roger; her seven grandchildren, their two fiancés, and a great-granddaughter all of the San Antonio TX greater area; brother Daniel Medrano II and his wife Tomasa Medrano of Denver City TX, his 8 children and their families. She is preceded in death by her parents, brother René Medrano, husband Jacobo Deanda, nephews Alfredo Medrano and Daniel Medrano III.