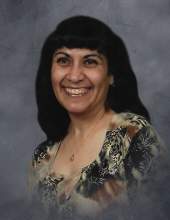 Celebration services for Sally Rodriguez of Wellman, TX will be at 2 pm Friday, November 27, 2020, at Calvary Baptist Church in Brownfield. Services will be conducted by Pastor Steve Carter, Calvary Baptist, and Les Wilkes, lifetime brother.

Visitation will be Wednesday, November 25, 2020, from 6 pm to 8 pm at the Brownfield Funeral Home.

Sally Duran Rodriguez was born on September 19, 1959, in Mexico City, Mexico, to Celso and Maria Duran. Sally graduated from Union I.S.D in 1979. She then graduated from Jessie Lee's Cosmetology Institute in Lubbock, Texas, but found her career as a Pharmacy Tech for United Supermarkets for 35 years. Sally was a member of Calvary Baptist Church and also a board member for the La Mesa de Dios Emmaus Community. She also served as a member of the Wellman City Council.

Sally is preceded in death by her Mom, Maria Duran, and a brother, Mario Duran.

In lieu of flowers, the family requests any donations be made to the Youth organization at Calvary Baptist Church.