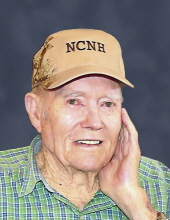 A graveside service will be held for Asa “Ace” Lee Boyd, 91, at 4:00 pm on Wednesday, July 8, 2020, at Terry County Memorial Cemetery in Brownfield, TX. Ace was a resident of Brownfield for 61 years before moving to Northern Arkansas in 2015 to be closer to his children. He passed away peacefully there on July 4, 2020. Online condolences may be left for the family at www.brownfieldfuneralhome.com.

Asa, better known as “Ace,” was born on January 31, 1929, to Horace Thomas and Mary Octiveen (Whitfill) Boyd near San Angelo, TX, in the Brentwood area by the Concho River. He served as a Seaman in the US Navy from 1947 to 1953. Ace Boyd loved to spend time with his friends and family. He enjoyed recalling his youth. He fondly remembered the time he spent with his aunts, uncles, and cousins in Arizona and California. He would tell stories of a memorable summer he spent felling and peeling Douglas fir trees in Oregon with his uncle and cousins.

He moved to Brownfield after his discharge from the Navy and attended Calvary Baptist Church with his family. That is where he met Billie Nell Runnels. They married in February of 1953 and celebrated 60 years of marriage before her death in October of 2013. Ace was a building contractor and master carpenter. He also loved his church and his church family. He and Billie were members of Immanuel Baptist Church for many years. They loved Jon and Mary Ann Patrick and their four daughters and considered them as part of the family. Ace Boyd was a very kind and generous person. He worked hard to provide for his family. He was tender-hearted and would do anything for anyone he possibly could. He was preceded in death by his wife Billie, his parents Horace and Mary, his sister Colleen Fisher, and granddaughter Christina Dawn Boyd.

Asa Boyd is survived by a daughter, Dawn Sorbo and husband Louis of Yellville, AR; a son, Scott Boyd of Brownfield; 2 grandsons, Jeffrey Sorbo of Hamden, CT, and Ryan Boyd of Crosbyton; a half-sister, Nancy Smith and husband Eddie of Lubbock; 2 step-sisters, Wanda Peacock and Annette Turner, both of Lubbock; a step-brother, James Barnes of McAllen; and beloved brothers and sisters-in-law, nieces and nephews.

In lieu of flowers, the family suggests donations be made in Ace's memory to Meals on Wheels.