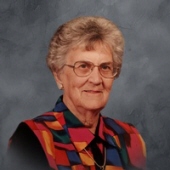 It is hard to imagine a more independent and hard working woman than Auvanell Caswell Parrish.
"Auvy" was born August 28, 1923, in Hollis, Oklahoma to Charlie Douglas, Sr (Papa Doug) and Bessie Mae Walls Caswell (Mama Bessie). She was the ninth of 15 children born to the couple. She moved with her family to Gomez in 1941 and graduated from Brownfield High School that same year.
Auvy went to Lubbock to Draughns Business College and then moved to California to work during the war. She worked in the Douglas Aircraft factory and lived with her sister.
While living in California, Auvy met Burton Raymond Parrish who was serving in the military there. The couple married on August 28, 1943 in Arizona. Burton passed away January 17, 1977.
After their marriage, the couple lived in a small apartment in Tacoma, Washington and then later in Bell, California. After Burton was discharged, the couple moved to New Lynn, Texas near Tahoka.
Auvy stated that the trip back to Texas was a hard one. "We didnt have much money so I fixed chicken to take on the train. We got off the train at a layover and missed the train when it started going again. We caught the next train, but we lost all the food and my coat. It was so cold. I wore Burtons coat and he wrapped up in an old blanket."
Burton and Auvy moved to Meadow in 1944 and began farming, which they continued for most of Auvys life. They raised most of their own food and Auvy canned plenty to last through the year. They always had a garden, cows, chickens and hogs. Papa Doug would always give his daughters a milk cow for a wedding present.
Hard work was normal for Auvy and Burton. They had a great life and many blessings in their years together. They were blessed with two children - Carolyn Ann, born in 1944 and Richard Lewis, born in 1948. Sadly, Richard, who was an absolute laugh a minute to be around, passed earlier this year. This was a hard time for Auvy.
Auvy was always very involved in the lives of her children, serving as room parents for both throughout their years at Meadow Schools. Auvy continued to stay active following the death of her husband, continuing the farming operation throughout her life. Auvy also developed a new interest and source of income when she got into the rent house business in Brownfield. Everyone knew "Mrs. Parrish" and her rent houses.
She was very accommodating and found it hard to ever evict anyone, even after months of no rent. Auvy hired Orlando DeLaO as her maintenance guy and a great friendship was formed. Auvy would stop and pick up anything she saw on the side of the road that she thought could be put to use and Orlando could usually make it work.
Auvy was also famous for having ongoing garage sales for a while with many of her roadside finds.
Auvy was a member of First Baptist Church Brownfield and had been a long time member of the First Baptist Church of Meadow where she taught Sunday School for many years.
She was a hard worker until she just couldnt anymore. She was independent to the point of aggravation to her family. She never wanted any help, instead preferring to do for them. Auvy was one of a kind and will be so very missed.
She was the matriarch and last survivor out of the 15 kids and she missed her brothers and sisters dearly, as well as her Mama and Papa, husband Burton and son Richard. What a great reunion! The biggest room in heaven had to be rented out for sure! The annual Caswell Family Reunions on earth will surely be a bit quieter without Auvy keeping things going.
Auvy is survived by daughter Carolyn, daughter-in-law Linda Parrish, grandchildren Heath Bandy and Sabrina, Tiffany Smith and Byron and Mitzi Oliver and B.J., great-grand-children Carley Culverhouse, Bradley Bandy and Shiann, Bryce Smith, Alyssa Smith, Dakota Oliver, Mikaela Oliver, and great-great-grandchildren Paisley Culverhouse and Emma Salinas, sisters-in-law LaDoyce Caswell, Maurine Caswell, Norma Caswell and Rowena Caswell and a host of nieces and nephews.
The family wishes to thank her caregivers Michelle Castro, Esmeralda Aleman, Jerrine Palmer and the staff at Cottage Village and also Beyond Faith Hospice.
Visitation will be held from 5:00 pm - 7:00 pm Tuesday, April 30, 2019, at Brownfield Funeral Home.
Services will be held on Wednesday, May 1 at 2 p.m. at Meadow First Baptist Church with Greg Breedlove officiating, assisted by Gina Caswell Kelly.