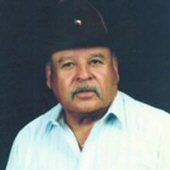 Services for Bacilio Lira, 92, of Brownfield will be held at 10am Thursday, June 2, 2016 at St. Anthony’s Catholic Church with Father Eduardo Teo officiating.

A rosary will be held from 6-8pm on Wednesday, June 1, 2016 at Brownfield Funeral Home.

Bacilio was born on May 18, 1924 in Yorktown to Serapio Lira and Cruz Calvillo. He was a devoted Catholic and a member of the Cursillo Movement. Bacilio married Belen Miller Longoria in Brownfield. He worked as a farm laborer from 1961 until he retired. Bacilio is preceded in death by his parents, Serapio and Cruz Calvillo Lira; 2 sisters, Callentana Lira and Tranquelina Ramos and a brother, Rufino Lira.