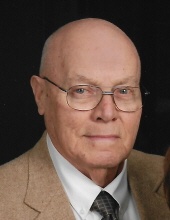 Barney B. Lindly, 83, went to be with his Lord and Savior on Friday, December 13, 2019, in Lubbock, Texas. He was surrounded by his friends and family at the time of his passing.

Services for Barney will be held at 10 am Wednesday, December 18, 2019, at Brownfield First Baptist Church with Dr. Matt Baird and Ernest Smith officiating. Burial will follow in the Terry County Memorial Cemetery.

Visitation will be held from 5-7 pm on Tuesday, December 17, 2019, at Brownfield Funeral Home.

Barney was born on August 8, 1936, in Brownfield, Texas to George B. and Sophia Lindly. He attended Brownfield High School and graduated in 1955. In 1960, Barney joined the United States Army. He served in the Texas National Guard from 1961-1966. He married the love of his life, Mary Lou Burton, on March 20, 1976, in Amarillo, Texas. They were married 43 years when the Lord called him home. Barney and Mary Lou owned and operated Main Street Hardware in Brownfield, Texas from 1981-2017. He was a member of First Baptist Church in Lubbock, Texas, and was a Scottish Rite 32nd-Degree Mason.

Barney was preceded in death by his parents, his siblings Herman, Don, and M.L. Blevins, Mildred Smith, and Dewey Lindly.