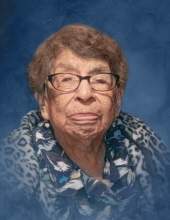 Funeral services for Basilia Fabila, 92, will be held 10 am Saturday, August 17, 2019, at St. Anthony’s Catholic Church with Father Jose Kochuparambil officiating. Burial will follow in the Brownfield Cemetery under the direction of Brownfield Funeral Home.

There will be a rosary held both Thursday and Friday, August 15 and 16, 2019 at Brownfield Funeral Home starting at 6 pm.

Basilia passed away Tuesday, August 13, 2019, at home in Brownfield. She was born March 6, 1927, in Lytton Springs to Herminia Beltran and Nazario Vasquez. She grew up alongside her brother Apolonio Vasquez in Lockhart. In 1944, she met the love of her life, Vicente Fabila, and they married the same year on September 20, 1944, in Lamesa, TX. They happily lived together for 68 years until his untimely passing in 2012.

Basilia was the type of woman who put everybody before herself and loved her family unconditionally. Her favorite pastimes were taking care of her grandchildren, going to bingo, watching telenovelas, and spending time with her family. Basilia is the most beautiful, loving, patient, strongest, bravest, and independent woman ever. She will forever be missed and loved by everyone whose lives she touched. Our mother is irreplaceable. She is preceded in death by husband, Vicente Fabila Sr., parents Herminia and Nazario Vasquez, son, Nazario “Chayo” Fabila, and brother, Apolonio “Paul” Vasquez Jr.