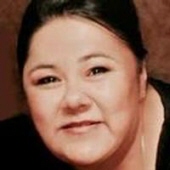 Services for Bernice Arrezola Riojas 46, of Brownfield will be at 10 AM, Wednesday, December 10, 2014 at St. Anthony’s Catholic Church with Father Gerald Leatham officiating. Burial will be in Brownfield Cemetery under the direction of Brownfield Funeral Home.

Visitation will be at Brownfield Funeral Home on Tuesday evening from 6-8pm.

Our beloved Bernice passed away on Saturday December 6, 2014 in Lubbock, TX after a courageous battle with cancer. She was born on April 3, 1968 in Brownfield, TX to Louis and Oralia Arrezola.

Bernice married and is survived by the love of her life, Ramon Riojas on August 23, 1991.

Bernice graduated from Brownfield High School in 1986, where she was actively involved in many activities, but is most fondly remembered as “Mr. Cub”. She also attended South Plains College and attended a Hotel and Business Institute in Dallas. She was a lifelong member of St. Anthony’s Catholic Church and was a supervisor for Bealls Department Store for 11 years. Bernice was an avid supporter of Relay for Life and loved her Dallas Cowboys and Texas Tech Red Raiders.

During the holidays Bernice was most often in her kitchen preparing her famous desserts for family and friends. She was the heart and soul of organizing family festivities.

Bernice is preceded in death by her father Louis Arrezola and her twin sister, Beatrice Arrezola.

Bernice was a very special and loving aunt to her many nephews and nieces. Her loving laughter will long be remembered by her family and numerous friends. Her impact on each and every one of our lives will never be forgotten.