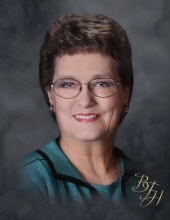 Betty Lynn Brasher peacefully fell asleep in the arms of Jesus on December 16, 2021, at the age of 83 in Edmond, Oklahoma. She was born on June 9, 1938, in Meadow, Texas to Frank & Maggie Daniel after 23 years of marriage.  Her love and devotion to her family and friends, coupled with her strong Christian faith, was evidenced in a lifetime spent supporting others in any way she could.

Betty graduated from Brownfield High School in 1955. She began working at Frank Daniel Furniture & Electric while in high school, she also worked for Goodpasture Grain in Brownfield. Several years later she became a legal secretary for Jim Pete Hale. In 1980 Betty and her late husband James opened Brasher’s Furniture in Brownfield, Texas and she remained there until her retirement in 2000. Betty and James counseled and prayed with many during their years of Christian service.

In 2002, Betty came out of retirement and worked part-time at Thermo Fluid, Inc from 2002-2004 when she retired for good. Betty enjoyed her family, church, photography, scrapbooking, genealogy, and helping the community. She was on the advisory board of the National Cowboy Symposium of Lubbock and was also their photographer from 1995 to 2004. In her later years, her life was enriched by a special friendship with Freddy Gandy.