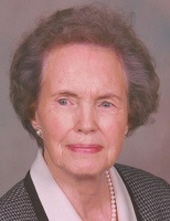 Family and friends of Bettye Hurd will gather for worship and will celebrate her remarkable life of 103 years. Bettye passed away Saturday, June 15, 2019, at her home in Brownfield.

Bettye was born in a smokehouse on March 9, 1916. Although born in Post, she was raised at Westover. Her father, Arch Holmes, was a carpenter and cabinet maker. When he was elected sheriff of Baylor County in 1928, the family moved to Seymour. She dedicated many afternoons after school sitting and reading books to an elderly neighbor know as Grandma Brinkley.

After graduating from Seymour High School, Bettye worked at Seymour First National Bank. During this time, she met and married Howard Hurd of Vera. They ran a cafe in downtown Seymour for several years. In 1950 they moved to Brownfield and began deep breaking and farming. It was in Brownfield that they raised their two children.

Bettye was active in the First United Methodist Church and in the Order of the Easter Star. She was a staunch Democrat. She chaired efforts to organize voters for Democratic candidates in several West Texas counties, including candidates John Connally and Lyndon Johnson. She served as State Democratic Executive Committee Woman from the 28th Senatorial District and actively participated in several Democratic state conventions.

Bettye loved card games and was a Life Master in Bridge. In her later years, she was an inveterate domino player. She was highly competitive and won on a regular basis. Although she won thousands of games each year, she never gloated after a win; instead, she would just smile. She smiled a lot!

Bettye was an avid big game hunter, and in 1976 achieved a New Mexico Grand Slam at Philmont Boy Scout Ranch. She and Hurd loved traveling and circled the globe several times.

She loved art and owned The Hurd Gallery of Fine Art. After her 90th Birthday, Bettye decided that her recollections would fade with time, and that future generations would not know what life was like in her day. She, therefore, wrote a memoir containing many of her life experiences. She published under the title "From Sugar eats to Dr. Phil." it is an enjoyable and enlightening read.

Bettye truly loved her family. She taught children poems and games to all her grandchildren and then to her great-grandchildren. We will miss her greatly. We would like to thank Jacque Seaton, Susie Perez, Olala Ramirez, and Toni Ann Turrentine for their many years of loving care of Bettye.

Burial service will be at Terry County Memorial Cemetery. Celebration services for Bettye, followed by family visitation will be held at the Brownfield First United Methodist Church on Tuesday, June 18, 2019, at 1:30 p.m. Rev. Ruby Moultrie will officiate. The Family suggests donations to Our Promise Youth Academy, Brownfield or to your favorite charity.