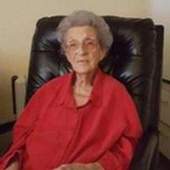 Memorial Services for Billie M. Faught, 92, of Brownfield will be at 10 am, Thursday, June 8, 2017 at Calvary Baptist Church with Wayne Fillingim officiating. Online condolences may be made at www.brownfieldfuneralhome.com.

Billie was born on June 3, 1925 to Rupert Earl and Clemmie (Howard) McNiel in Haskell County. She graduated from Union High School and also received a business degree from Draughn’s Business School in Lubbock. Billie met Clarence through family members and they were married in Seminole on February 24, 1947. They had 43 wonderful years together before he passed away in 1990.

Billie was a sweet and loving woman who loved the Lord and served Him faithfully. In the early 1950’s, she and Clarence moved to the Union Community where they attended Union Baptist Church until it closed in 1990. Billie always had a Bible at her side and remained active in church all her life. She was a blessing to her family and was very proud of her children and grandchildren! She loved attending their extra-curricular activities, which included 13 State tournaments over the years – the last one at age 91. Billie was known for her delicious home cooking as well as her love for gardening. She was a talented quilter and leaves behind a legacy of beautiful quilts for her family.