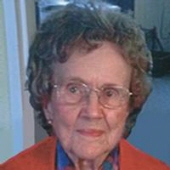 Funeral services for Billie Zoe McCravey, 90, will be held at 10 a.m. on Saturday, July 15, 2017, at Plains First Baptist Church with Rev. Patrick Hamilton officiating. Burial will follow in the Plains Cemetery under the direction of Brownfield Funeral Home.

Billie went home to be with the Lord on July 8, 2017, in Lubbock. She was born on February 11, 1927, to H.M. and Willie VanZoe Smith in Hereford. She married Walter LeeRoy McCravey in Plains on March 11, 1946. They had 68 wonderful years together before his death in 2014. The Lord blessed Billie with many wonderful things in life, but she was most proud of her kids and grandkids.

Billie is preceded in death by her parents, H.M. and Willie VanZoe Smith; her husband, Walter LeeRoy McCravey; a son-in-law, Kenneth Horn; 2 brothers, and 3 sisters.

She is survived by a son, Greg McCravey and wife Shari of Plains; a daughter, Jan Horn of Plains; a brother, Glen C. Smith; a sister, Dorothy Wolf-Vogelsang; 11 grandchildren, and 10 great-grandchildren.