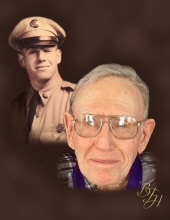 Billy Joe Tidwell, loving husband, father, and grandfather entered the gates of heaven on October 22, 2021, at 91 years old. He was born on September 3, 1930, to Charley Houston Tidwell and Mary Magalene Lehew in Bennington, Oklahoma. He grew up in Bokchito, Oklahoma, and the surrounding area.

Left to cherish his memory are his wife of 70 years, Gloria, and children Judy Elmore (Arnie), Jim Tidwell (Donna) of Lubbock, Nancy French of Nacogdoches, John Tidwell (Karen), and a daughter-in-law Nancy Tidwell of Brownfield, 8 grandchildren, 12 great-grandchildren, 2 great-great-grandchildren, and numerous nieces and nephews. He is preceded in death by his parents, his son Billy Lee Tidwell, his brothers Ray, Paul, Bobby, and Charles, and grandsons, Jason, Arron, and Jeremy Tidwell.

As a young man he had a desire to seek his fortune, so he ventured to Meadow, Texas, where he did seasonal ginning for Herman and Daisy Combs, he returned several years to work before being drafted into the United States Army. He married his childhood friend and sweetheart Gloria Lea Stowe, March 24, 1952, in Hugo, Oklahoma, before being shipped overseas. He was a true patriot, and very proud to have served during the Korean War on Koje Do Island in the Sea of Japan. During his active military service, he received the United Nations Service Medal, Korean Service Medal with three bronze Campaign Stars, National Defense Service Medal, and the Good Conduct Medal. He was released from active duty on March 5, 1954, and transferred to the Army Reserves to complete his 8 years of service.

He brought his family to Meadow, Texas, and settled there. He used his GI Bill to go to diesel mechanic school, and then began his career with Meadow International Harvester Dealership. He loved his work as a mechanic, but his dream of becoming a farmer took over. He started saving, and started a custom harvest business with the help of his brother Paul, and his wife Gloria, to make extra money. Soon he was able to rent his first farm, and that's when he was truly happy, doing what he loved. He never had a hobby as he was in his element when he was tilling the soil, planting, and harvesting the fruits of his labor. He taught his children and grandchildren the value of hard work and saving. Doing what he loved, he was able to pass on a beautiful legacy to his loved ones.

In lieu of flowers, the family asks that you donate to your favorite charity.