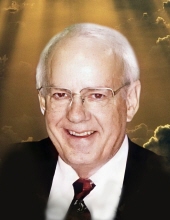 Bob passed away on January 22, 2021. Bob was born July 17, 1930, in Acuff, TX and was married to Charlene Barnes in 1948 until her death in 2016. He married Billie Strickland in 2017. Bob attended Baylor University, David Lipscomb College, Abilene Christian University and received his BS and master’s degree from Texas Tech University in 1971. Bob lived his life as a true servant of the Lord. He was a Minister to Churches of Christ starting in 1954 at Bethel Southport, TN. From there his mission took him to Rosebank, and Nashville TN, Cedar City, UT, then to Meadow TX, Monterey Church of Christ in Lubbock, and Cactus Drive in Levelland, TX. Bob preached at gospel meetings in several states, Canada, England, Northern Ireland, Scotland and Switzerland. In 1975 he began his ministry at the Brownfield Church of Christ in Brownfield, TX. Many still remember Bob's radio program, "Better Day", which ran for 15 years, and his weekly article, "Reynolds' Rap". Bob continued to stop by the church office to check in, get any news and help out in any way he could. Bob served for many years on the Board of Camp Blue Haven and he loved staying at the camp in the summer to teach camp sessions. Bob was a staunch supporter of the Brownfield Church of Christ’s “Thursday School” from 1981 to 2019. Bob was a faithful servant to the New Life Behavior Ministries sharing the gospel with inmates. Bob also hosted weekly CASA classes since 2002.

In lieu of flowers, donations may be made to: Blue Haven Youth Camp, Inc Box 92156, Southlake, TX 76092 or to the Children’s Home of Lubbock, Lubbock, TX