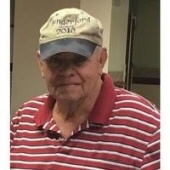 Memorial services for Bobby Glenn Hungerford will be 10 am Saturday, May 6, 2017 at Brownfield Funeral Home Chapel with Doug Puryear officiating.

Bobby passed away April 22, 2017 in Lubbock. He was born July 10, 1936 in Big Spring to Paul Henry and Lillian Ethel Hungerford. He married Doris J. Tuttle April 20, 1957 in Brownfield. Bobby served in the United States Army Reserve. Bobby lived in Brownfield his whole live and was a carpenter which he passed on to his son and grandson. He was easy to get along with and enjoyed meeting new people. Bobby loved to tell old stories about family and friends to make sure everyone had a good time. He was a family man and loved his grandchildren. He is preceded in death by his parents, Paul and Lillian Hungerford, brothers, Charles, Thomas, Harold, Joe, A.B. Hungerford, sisters, Pauline Gentry, and Doris June Day.