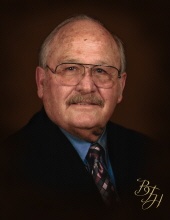 A Memorial Service will be held for Bobby Lee Brewer, 86, of Brownfield, at 11:00 am, Wednesday, November 24, 2021, at Calvary Baptist Church with Rev. Steve Carter officiating.

Bobby, beloved Husband, Father, Brother, and Grandpa was called to his eternal resting place on November 20, 2021. He entered this world on August 20, 1935, in Hale Center, TX, born to L.J. and Delores Brewer. He attended schools at Hale Center, Abernathy and Texas A&M. Bobby married Joyce Oson on August 22, 1966, and they had 34 years together before she passed away in October of 2000. He then married Carolyn Jo McKinzie on November 3, 2001, in Brownfield.

After graduating, Bobby moved to Plainview and started working for Pioneer Natural Gas in 1961. He moved to Lubbock in 1972, and then to Brownfield in 1986. Bobby retired from Energas Co. on August 30, 1993. He worked in Plainview, Lubbock, and Brownfield. He has been active in the Optimist Clubs in those cities, as well as the Toastmasters, Boy Scouts, Boys Clubs, and served as a coach of Little League Football. Bobby was a member of the Builder's Association, President of the Chamber of Commerce in Brownfield, and was involved in Industrial Development, FYI Club, and the Brownfield Manufacturing Co.

Bobby was a former Mayor of Brownfield and a member of Calvary Baptist Church. He was preceded in death by his first wife, Joyce Brewer; his parents; a grandson, Matthew McKinzie; 4 sisters, Nanny Lou Jarnigan, Mary Lou Brewer, Gwenith Purvis and Carol Johnson; and 3 brothers, Dwaine Brewer, Billy Brewer and Sammy Brewer.