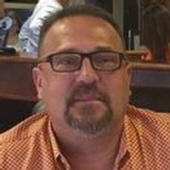 Brian Douglas Smith passed away December 4, 2016 in Brownfield. He was born in Newark, OH to Robert and Theresa Hissong Smith on July 21, 1964. Brian graduated from Upper Dauphin Area High School and then received an associate’s degree from South Plains College. He married Beth Duran in Brownfield in August of 1990. Brian worked as a police officer in Abernathy, a corrections officer and then as a sales representative for Spike Dyke in Lamesa. Brian served in the United States Army, National Guard, Army Reserve and Navy Reserve.

Brian was a loving husband, dad and son. He was a very caring person, he would help anyone anyway he could. He also possessed a great sense of humor which he took out on his co-workers and family. For anyone who knew Brian, you couldn’t forget his orange shirts or his larger than life presence. Brian had a tremendous love for his feathered kids, Roxanne, Captain Rowdy, and Marley.

He is survived by his wife of 26 years, Beth Smith, of Brownfield; daughter, Hollie Denton and husband, John, of Austin; son in our hearts, Norman Aronsen, of Austin; mother, Theresa Smith of Shallowater; father, Robert Smith of Round Rock; brother, Brad Smith and wife, Stephanie, of Willis; sister, Robbin Colley and husband, Jon, of Round Rock; nieces and nephews, Shilo and Alex Fonseca, Shea, Keegan and Colton Smith, and Laken Colley; and close friends Lee, Mindy, and Colton Rodgers of Brownfield.

In lieu of flowers the family requests that you make donations to a parrot rescue.