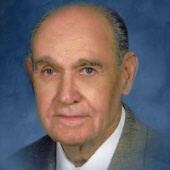 Services for C.R. Lowrance, 94 of Brownfield will be held at 11 am Saturday, June 15, 2019, at First Christian Church. Graveside services will follow the service at Terry County Memorial Cemetery under the direction of Brownfield Funeral Home.
There will be a family visitation held on Friday, June 14, 2019, from 5-7 pm at Brownfield Funeral Home.
C.R. passed away on June 10, 2019, in Medical Center Hospital in Odessa, Texas. He was born on May 16, 1925, to Earnest and Etta May Lowrance in Floydada, Texas. He served in the Army during World War II. He was in the Pacific Theater serving in Japan. After coming back to the Levelland area after the war, C.R. met Wilma Qualls. They married on September 5, 1947, in Spade, Texas and were married for 68 years. C.R. went to work for Halliburton services in Levelland and transferred to Brownfield in 1955. He retired after 38 years with Halliburton. C.R. is preceded in death by his parents, Earnest and Etta May Lowrance, his wife, Wilma Lowrance, and granddaughter, Lisa Ann Lowrance.
C.R. is survived by 2 sons, Charles and wife Sherry of Flint and Michael and wife Linda of Odessa; 3 grandchildren, Kimberly Mayo and husband Rick of Bullard, Chad Lowrance and wife Tammy of Mansfield and Chris Lowrance and wife Cherie of Whitehouse; 8 great-grandchildren, Alexandra Lowrance, Nicholas and Mason Mayo, Brendon, Carson, and McKinley Lowrance, Corey and Candace Lowrance; a sister, Hazel Taylor of Henderson.