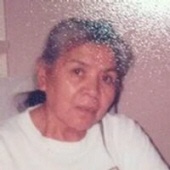 A funeral service will be held at 10am Monday, August 31, 2015 at St. Anthony's Catholic Church. Burial will follow in the Terry County Memorial Cemetery.

Candelaria Esparza Flores passed peacefully from this life on August 27, 2015 at the age of 72. She was born on February 2, 1943 to Masedonio and Patricia M. Esparza in Solima Coahula, Mexico. She married the love of her life, Juan O. Flores, in Mexico on January 29, 1959. They moved to Texas in 1969 and raised their children. Candelaria and her husband, Juan, are members of St. Anthony's Catholic Church in Brownfield, TX.

The Flores family appreciates donations to be made to St. Anthony's Catholic Church of Brownfield, Tx or your favorite charity.