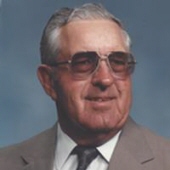 Cecil passed away Saturday, December 31, 2016 in Odessa. He was born December 05, 1927 in Big Springs to James Franklin Thomason and Alice Wilborn. He attended Wellman schools. Cecil served in the United States Army from 1945 to 1948. He worked as a police officer in Denver City for several years and then at Halliburton for 11 years. He was a member of the Masons for more than 50 years. Cecil enjoyed having lunch at the Senior Center. Cecil is preceded in death by his parents, two sons, James and Johnny Thomason.