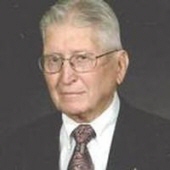 Memorial services for Charles Odell Sears will be held 2pm Tuesday, May 20, 2014 at the First United Methodist Church in Brownfield with Rev. Ken Flowers and Rev. Ruby Moultrie officiating. Burial will be prior to the memorial service at 11am in Terry County Memorial Cemetery under the direction of Brownfield Funeral Home.

There will be a family visitation at Brownfield Funeral Home on Monday evening from 5-7pm.

Odell was born June 11, 1923 to Kellie and Era A. (McLeroy) Sears in Brownfield. He graduated from Brownfield High School in 1942 and then enrolled at John Tarleton College. He was a U.S. Army Veteran serving in WWII in the 739th Tank Battalion. Odell participated in many battles including the Battle of the Bulge. After being discharged in November of 1945 Odell married his wife of 68 years, Louise Daughrity, on December 15, 1945. They owned and operated Sears-Copeland Hardware for many years before retiring. Odell was an active member of the First Baptist Church where he served as general secretary of the Sunday school. He was the city judge of Brownfield for over 11 years. He also served on the board of directors of South Plains College in Levelland, Terry County Appraisal District Board Member, Brownfield City Council, and he was president of Brownfield Noon Lions Club and a 32nd Degree Mason. Odell was voted Terry County’s Outstanding Citizen in 1987.