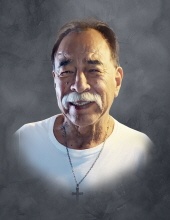 Funeral services for Christoval Rodriguez, Jr. will be held at 10 am, Friday, September 10, 2021, at St. Anthony's Catholic Church with Father John Ohlig officiating. Burial will follow in the Brownfield Cemetery under the direction of Brownfield Funeral Home.

Chris was born on June 6, 1949, in Brownfield to Christoval Rodriguez and Socorro Herrera Rodriguez. He farmed all his life. Chris was a member of St. Anthony's Catholic Church. He is preceded in death by his parents, Christobal and Socorro Rodriguez; a brother, Mike Mata; a sister, Carolyn Huerta; a son, Daniel Rodriguez; and a granddaughter, Jessica Trevino.

Chris was a loving Dad, Brother, Grandfather and Uncle. He will be missed dearly by all his family.