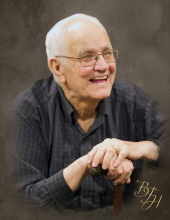 C.L. "Bobby" Lewis, 98, passed away peacefully on December 11, 2021, while holding the hand of his youngest grandson and surrounded by loved ones.

Bobby was born on February 15, 1923, to Clyde and Ora Sawyer Lewis in Brownfield, Texas. He graduated from Brownfield High School in 1940 and Texas Technological College (now Texas Tech University) in 1944 with a degree in Agriculture. During WWII, he enlisted in the Navy, went to pilot training at Pensacola Naval Air Station, FL and on May 22, 1945, he earned his wings and became a naval aviator.

Bobby always loved the outdoors and knew from an early age he wanted to be a rancher. In the late 1940s, he moved to Buffalo, Texas where he taught school while building his ranch. In the early 1960s he decided to ranch full time and remained in Buffalo until 1973. It was here that he raised his three children, was an active member of the First Baptist Church in Jewett, served on the school board for Leon ISD and made many lifelong friends. He always remembered these years as the happiest of his life. He sold his ranch to be closer to family and moved to Crossroads, New Mexico where he continued to ranch until the year 2000. The New Mexico ranch is the one the grandchildren remember so fondly and looked forward to "summer camp" every year with Mimi and Grandpoppy. Each of the grandchildren can tell many tales of their memories and adventures on the ranch.

Bobby retired in Lubbock, Texas where he continued to be active socially. He attended Downtown Bible Class on Sundays and enjoyed morning coffee with friends three days a week. In 2018, Bobby moved to an assisted living community in North Richland Hills, Texas to be closer to his grandchildren and great-grandchildren who visited him often. Bobby was a tough cowboy with a tender heart. He loved people, but especially his grandchildren and great-grandchildren. Nothing made him happier than holding a baby. Even in his later years, he did not lose the joy of hearing babies and children. Bobby was well-respected and loved by his community and family. He will be missed greatly but his family rejoices knowing that he is in the arms of our Savior and reunited with loved ones that went before him.

In lieu of flowers, memorials may be made to Texas Tech Foundation with Rob Lewis Scholarship in the memo. Address is:CASNR Development Box 42123 Lubbock, TX 79409-2123