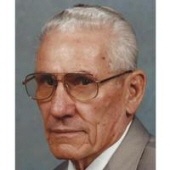 Family visitation will be held from 6pm to 8pm Tuesday, February 16, 2016 at Brownfield Funeral Home.

Clarence passed away Sunday, February 14, 2016 in Brownfield. He was born April 1, 1928 in Brownfield to Arthur Edward and Miriam Ervilla Casebeer. He attended school in Brownfield. Clarence served in the United States Army from 1950 to 1952. He married his wife of 42 years, Doris Menck on November 29, 1954 in Hobbs, NM. He worked as a Truck Driver for several years and then as a Terminal Manager. Clarence was a member of Calvary Baptist Church where he served as a deacon. He loved his Lord and church family and was a role model for the youth at church. Clarence also enjoyed game day at the church. He then married Ruby Lurene Poindexter on July, 12, 1997 in Odessa. Clarence was a loving father and honest and loyal man. He loved his grandchildren and was always there in a time of need. He is preceded in death by his wife, Doris Casebeer, on November 2, 1996, and Ruby Casebeer January 23, 2008. He is also preceded in death by two sisters, Veldene Chapman and Mary Wells, two brothers, Elwood Casebeer and Elwayne Casebeer, and grandson T.J. Green.

The family would like to offer a sincere thank you to the Brownfield Regional Hospital, Cottage Village and Legacy of Love Hospice.

Donations may be made to the Calvary Baptist Church.