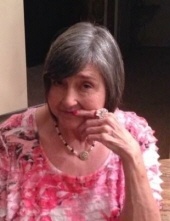 Services for Claudine Nicholas, 70, will be held at 10 am, Monday, July 13, 2020, at Brownfield Funeral Home Memorial Chapel with Rev. Chris Seaton officiating. Interment will follow at Terry County Memorial Cemetery. Claudine will lie in state Monday morning prior to the service. Online condolences may be left for the family at www.brownfieldfuneralhome.com.

Claudine Nicholas was born on February 28, 1950, to Carl and Doris (Lang) Peters in Amarillo, Texas. She was raised in Brownfield and graduated from Brownfield High School in 1967. Claudine was a natural beauty with a loving spirit. She was a Terry County Harvest Festival Queen as well as Homecoming Queen, and her beauty caught the eye of young college student, James “Nick” Nicholas one evening at the drive-in theater in Brownfield. They were married at First Baptist Church in Brownfield on February 1, 1969. A few years later, the couple moved to Lubbock where they spent 45 years before moving to Del Rio 11 years ago to enjoy their retirement.

Claudine was a beautician as well as a lab tech for Family Photo in Lubbock. An avid sports fan, she loved her Dallas Cowboys and all the Texas Tech teams. She played sports as well — her favorite was softball, and she played on co-ed teams as well as a Mother/Daughter team. Claudine loved animals, especially her grand-dogs. She had a special place in her heart for Tuxedo and made every effort to spoil him like a grandchild.

Her children say their parents provided them an “awesome” childhood, and they were often the envy of their friends. Claudine was always up for adventures and would often join in her daughter’s mischievous pranks. They fondly describe her as fun-loving and family-oriented, and she was the strongest person her daughters know. They describe her as a “fighter” who never gave up even after suffering a severe stroke many years ago. Claudine fought a “good fight” and went home to be with her Lord on July 7, 2020. She was preceded in death by her parents, Carl and Doris Peters.

Claudine is survived by her loving husband, James “Nick” Nicholas of Del Rio, TX; 2 daughters, Nicole Nicholas of Lubbock and Tracy Nall and husband Dee of Lubbock; a brother, Ken Peters and wife Patricia of Lubbock; 5 grandchildren and several nieces and nephews. Claudine will be greatly missed by family and friends, but her memory will live on in their hearts.