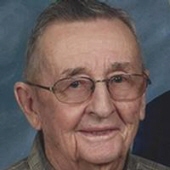 A Memorial Service for Cletus Edward Floyd, 92, of Union and Brownfield will be held at 2 pm Tuesday, January 6, 2015 at First Baptist Church Activity Center in Brownfield, officiated by Dr. Carl Moman and assisted by Rev. Cletus Caswell.

Cletus was born on February 26, 1922 to Olon Edward Floyd, Sr. and Lillie Belle Lyon in Calera, OK. He moved to Union at the age of three, and lived within a 1 ½ mile radius for 83 years. He graduated from Union School in 1939 and became a point guard for the Wayland Baptist College Jack Rabbits in 1940. As much as he loved playing college basketball, he loved a “pretty little blonde girl” back home more, and after his first year of college he moved home to marry the love of his life, Joy Inez Simpson, on July 26, 1942 in Brownfield.

They had met years before at Union Elementary School. It was Christmas time and Joy’s first day as a 1st grader, when she came home and announced that she had met her boyfriend—2nd grader, Cletus Floyd. They became the best of friends and remained so until his passing. A month after they were married, Cletus joined the military and served in the Army Air Corp during World War II.

Cletus is described by his family as being an “amazing husband,” the “world’s best father,” and a loving “Pop” to his many grandchildren. He was a farmer and was very active in his community. He served many years as a deacon and Sunday School teacher at the Union Baptist Church and was later a member of First Baptist in Brownfield. He also served in many leadership capacities with the Union School Board, was a founding member of West Gin, and was on the Farm Bureau Board for many years.

In lieu of flowers the family requests donations to the First Baptist Church Building Fund.